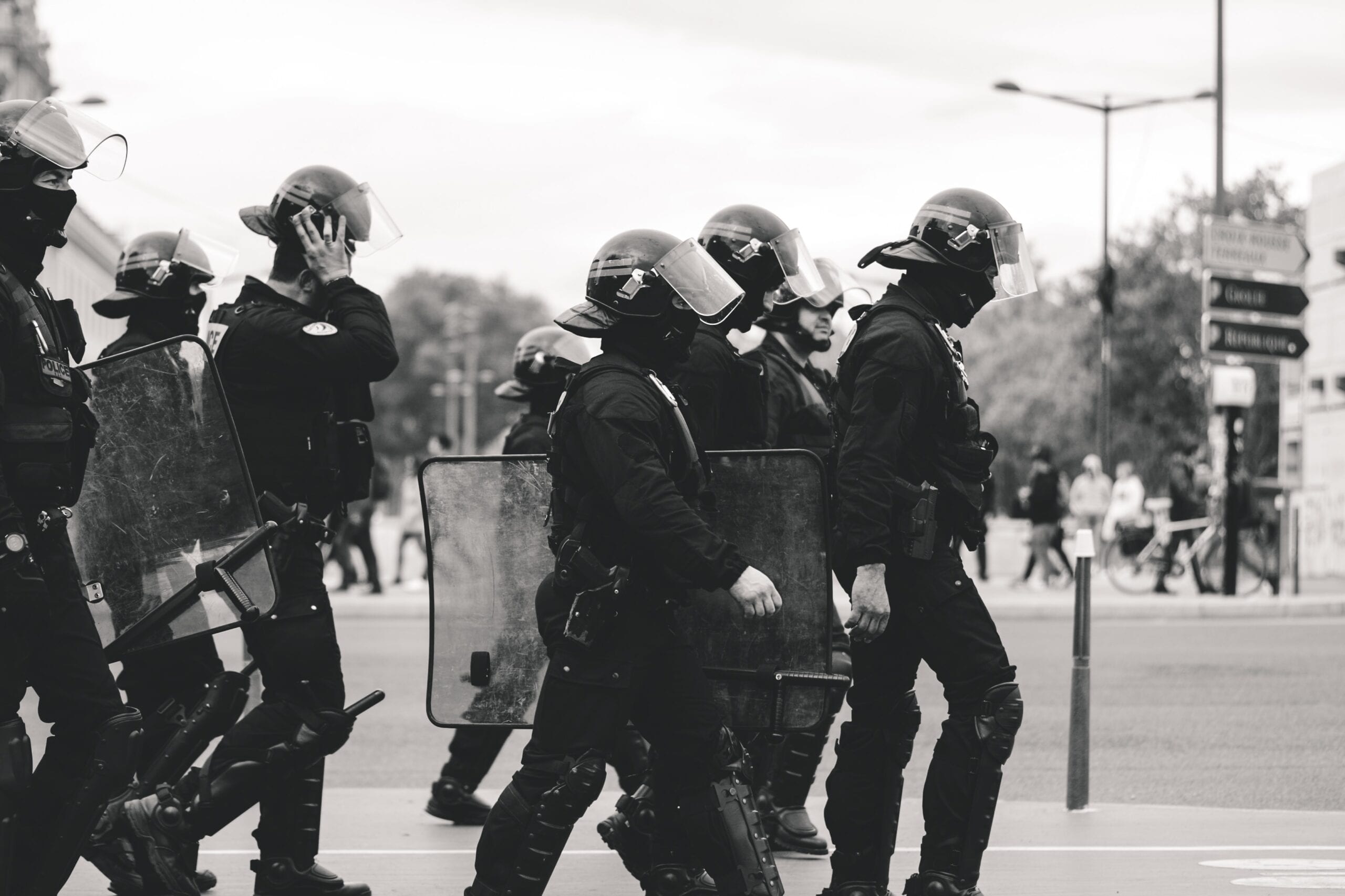 On 19th June 2013, more than 60 policemen raided the Roma settlement in Moldava nad Bodvou. They were members of riot police, traffic police, criminal police, emergency motorized unit and police dog handlers unit. They entered people’s homes without a warrant[1] seriously damaging some of them and they attacked about 30 people, including women and children, with batons and tasers. Then, they took some of the men they’d beaten up to the police station where they suffered more physical violence and psychological pressure. The police raid took place as a part of the repressive-investigative operation called 100 and there is no video recording of it.2  Thanks to ETP, a non-governmental organization, injuries of people were documented, as well as accounts of some of the witnesses. At the end of June 2013, several motions were filed with the Section of Supervision and Inspection Service of the Ministry of Interior calling for an investigation of lawfulness of the police intervention during that operation.3

While the inhabitants of Budulovská settlement were recovering from their injuries and were hiding with their relatives worried the police task force would come back, representatives of the Police Force and the Ministry of Interior were expressing their views on the incident signalling what the future development of the situation would be.

In August of the same year, the investigation of the police raid conducted by the Section of Supervision and Inspection Service of the Ministry of Interior was closed very quickly concluding the police had proceeded in line with the law. In the course of investigation, none of the victims or witnesses had been contacted.5

From the very start, the then Minister of Interior, Róbert Kaliňák, and the Prime Minister, Robert Fico, sided with the police and even came to Moldava to demonstrate their support of them. Robert Fico refused to give floor to the then Ombudswoman, Jana Dubovcová, when she wanted to present the irregularities of the police intervention during the raid in Moldava nad Bodvou to the National Council.6  In her report of August 2013, the Ombudswoman found violation of rights in several different areas and concluded that the police intervention had been inadequate. In the report she stated, for example, the following: „These findings are a clear signal we need to review the mechanism for investigating the police interventions. The MPs should be also concerned about the fact that the Police Force Inspection approved of such a course of action.“ 7 The Ombudswoman Dubovcová8 was pointing out that the Police Force Inspection was not independent and the current Ombudswoman Patakyová holds the same view.9

Five years after the police raid, six people were charged for allegedly giving a false statement because  they had pointed to policemen who had allegedly beaten them up during the raid. A coalition of NGOs drew attention to the injustice and the questionable investigation of the raid, as well as the charges against the beaten Roma men at the fifth anniversary of the raid. The organizations demanded the criminal proceedings against the police raid victims to be stopped.10During the trial, various problematic moments occurred such as for instance irregularities in the process of providing interpreting and translations of documents to the accused in the language they understood, irregularities in delivering mail to one of the accused or accusations that they had inflicted the injuries to themselves and xenophobic language used in the wording of charges.11 Therefore, European Roma Rights Centre filed a complaint with the European Human Rights Court in Strasbourg. In April 2018 lawyer Mgr. vanda Durbáková affiliated with the Centre for Civil and Human Rights filed another complaint with the European Human Rights Court representing another twelve victims.

The European Court of Human Rights (ECHR) ruled in favour of the victims of the police raid in Moldava nad Bodvou in 2013 in September this year. Victims in this case were represented by the Centre for Civil and Human Rights.12 In her press release, the Ombudswoman said: „The court ruling confirms the serious findings about human rights violation that were voiced and repeatedly highlighted also by the previous ombudswoman. I informed ECHR about them in my position paper and I welcome the fact the court took them into consideration in its ruling.“13

In its ruling, ECHR has found violation of the two applicants’ right not to be subjected to inhuman treatment. At the same time, the court concludes, the government failed to prove why the specific coercive measures had to be used against the applicants during the raid. Therefore, the state is accountable for the conduct leading to violation of the European Convention on Fundamental Rights and Freedoms. The court also focuses on the aspect of effectiveness of the police raid investigation.

According to the court, the irregularities in the Police Inspection investigation of 2013 were so serious that the investigation could neither be considered effective, nor in line with Article 3 of the Convention. The court has found the rights of the applicants were violated again due to the inadequate investigation.

Finally, the court addresses the suspicion that the police intervention could have been racially motivated. As a result of irregularities of the investigation, the Court has ruled that the Slovak Republic failed to meet its positive obligation under Article 14 of the Convention on the prohibition of discrimination. This stems from the fact that no adequate measures were taken in the course of investigating the incident to disclose the potential racial motivation of the police intervention or to clarify whether the ethnic origin of the applicants played a role in the treatment they had been subjected to.

ECHR has unanimously ruled that the rights of applicants under Article 3 and Article 14 of the Convention were violated and has granted 14 each of the applicants, by way of compensation for non-pecuniary damage they suffered financial compensation of 20,000 Euros, as well as financial compensation for their costs.15 Lawyer representing the victims, Vanda Durbáková, said: “The Court ruled symbolically on a day we commemorate our Constitution. It is thus a message to the state institutions they must always act in accordance with it and ensure rights and freedoms the Constitution enshrines. I believe this decision will help state authorities adopt systemic measures that will ensure each case of alleged police violence is duly investigated. I also believe they will adopt preventive measures to stop such cases from happening.”16

Moldava must not happen again

This ruling is an important message for Slovakia, for the accused and for all victims of the police raid, as well as for other people whose rights are denied to them or are violated. It is a message about violation of human rights, about inadequate interventions of the Police Force and a proof of improper procedures of its individual units.

The Ombudswoman said the following with regard to the ECHR ruling and the need to apologize to the victims:  „It is really worth considering whether we want to use a symbol and apologize. I have called for an apology in case of Roma women who had been forcefully sterilized and for other steps to be taken. For me, it is the first and the most basic thing to do and we should have enough self-reflection to apologize. It is a symbolic act and then, practical measures must be taken.“17

Firstly, the Slovak Republic owes an apology to Roma men and women who were subjected to inhuman treatment and whose rights were violated and who even found themselves in the position of the accused. Secondly, we all deserve to see specific measures taken so that no one has to worry that something like that could happen to them, too.

Ever since the police raid in Moldava, non-governmental organizations, as well as the Ombudswoman Patakyová and her predecessor Ms. Dubovcová, have repeatedly proposed such specific measures. One of the most frequently communicated requests is a system for using cameras on the police officers‘ uniforms during such police actions. So far, such a measure has not been taken.18 NGOs have, therefore, called on the government to promptly implement its obligations under the ECHR ruling primarily by setting up an independent inspection body to effectively investigate controversial procedures and actions of armed forces.19

Every year, we remember the raid in Moldava nad Bodvou as a symbol of injustice, police brutality and persisting racism. It is a reminder of the failure of the state, the police, the justice system and public officials, as well as of violation of the right to a fair trial and protection of crime victims. However, Moldava is also an important symbol of strength, courage and faith in justice demonstrated by the accused and other Roma men and women affected and those who believed them, helped them and showed solidarity with them from the very beginning.